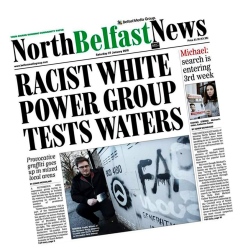 Images and slogans of the group ‘Generation Identity’ have appeared across the area in recent times and points to a worrying increase of far-right activity.

“Generation Identity is just a modern incarnation of the same fascist ideology that has always aimed to divide people along the lines of religion or race in the past”, Gemma said.

Generation Identity has made headlines recently when it was found that its members had taken part in ‘military-style training camps’ and was instrumental in crowdfunding a ship to stop refugees sailing the Mediterranean, a particularly inhumane activity considering the hundreds of people who have died making the dangerous journey.

“The Workers Party is completely opposed to dividing working people, be it by race or religion”

North Belfast needs more homes, decent work and better healthcare. This is what the people of North Belfast should fight for. It does not need the far-right attempting to fan the flames of division.” Gemma concluded.