“Cllr Pat Convery should now vacate his north Belfast council seat in the wake of his resignation from the SDLP”, Gemma Weir of the Workers Party has claimed. 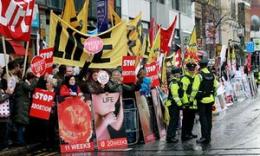 Women are subjected to verbal abuse and intimidation

Mr Convery and two other colleagues are at odds with the SDLP leadership following their refusal to support a motion condemning the harassment of women attending reproductive healthcare clinics.
“Cllr Convery’s position on the council is no longer tenable” Ms Weir said,
“He has refused to support the original motion and now claims that he has been ‘treated with disrespect’ and that ‘moral issues should be matters of conscience’. He has expressed no regrets whatsoever for his  refusal to support the motion and is more concerned about his own feelings rather than those of the women subjected to verbal abuse and intimidation as they seek to access reproductive advice, guidance and support.”
“If Cllr Convery has any respect for women he should resign his seat immediately”, concluded Ms Weir