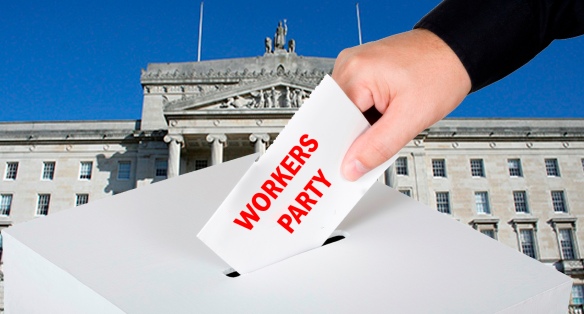 During this election campaign the main parties have traded on sectarian fears and tribal instincts in an attempt to maximise their votes.

To our cost, we have seen what that produces.

If you look beyond the bigoted agenda of Sinn Fein and the DUP the reality of life for ordinary people in Northern Ireland is hard and getting harder.

There are more than 100,000 children living in poverty.

Averages wages are lower than ten years ago.

We have the second highest level of workless households of all regions in the UK and at least 15,000 people are officially homeless.

That is the legacy of successive Assemblies and the contribution of the  DUP /Sinn Fein Coalition.

There is also a crisis in education, health and social care.  There are cutbacks to social welfare. Funding to culture and the arts has been very significantly reduced.

In every aspect of social, economic, cultural and community life working class people have been subjected to public expenditure cuts, marginalisation and exclusion.

To vote for the parties responsible for this and let them do the same thing again makes no sense at all.

That is why we need a Socialist Alternative.

That is what the Workers Party brings to this election.

The Workers Party is standing candidates  in the following constituencies