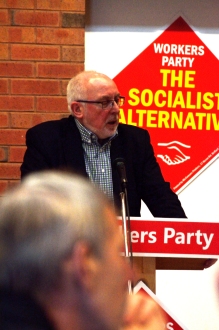 orkers Party’s Northern Ireland conference has set out the Socialist Alternative platform its candidates will stand on in the forthcoming Assembly elections.

In a day long event covering debates on the economy, education, women,international affairs and the environment speakers identified the class nature of our society and the issues and problems which that gives rise to.

“…we have more than 100,000 children living in poverty”, he a said. “Average weekly pay in Northern Ireland is lower than it was a decade ago. Northern Ireland has the second highest level of workless households of all regions in the UK.

“There are at least 15,000 homeless people and in Northern Ireland. There is a crisis in education, health and social care. There are cutbacks to social welfare. Funding to culture and the arts has been very significantly reduced”.

“In every aspect of social, economic, cultural and community life working class people have been subjected to public expenditure cuts, marginalisation and exclusion”.

“After years of austerity imposed on the working class by capital and its able lieutenants in the Stormont Executive, working people have suffered in terms of jobs, pensions, benefits, facilities and services. Particularly vulnerable people with long-term sickness or disability and with great reliance on both welfare benefits and key public services, such as social care, have suffered severe negative effects”

“That is why we must present the Socialist Alternative “, Gerry concluded.

‘On behalf of the KKE, the Greek communists, we convey to you a sincere message of solidarity in the context of the elections that will be held in Northern Ireland on the 2nd of March.’

We well know that the elections will take place in difficult, complex conditions for the working class and the popular strata of your country, who are being confronted by capital’s offensive and the grave consequences of the anti-people policies.