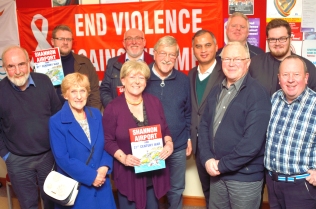 Founded in Dublin over twenty years ago the group  advocates for an independent Irish Foreign Policy, defends Irish neutrality and promotes a reformed United Nations as the institution through which Ireland should pursue its security concerns.

The meeting – called to discuss the likely impact of the election of US President Donald Trump on American foreign policy and military interventions abroad  – was addressed by Murad Quereshi of the ‘Stop the War Coalition’ and Roger Cole of PANA .

Part of the discussion focused on the role of Shannon Airport and the fact that over 730 US military flights landed at there in 2016. – more than two a day over the entire year. Of these, 413 were operated by the US Air Force, Navy or military, and the remainder were contracted troop carriers.

Discussions are to be held with a view to establishing a Northern Ireland branch of PANA .