The Workers Party has welcomed the outcome of the EU Referendum and has said that it is a clear demonstration that working people have rejected the political and economic direction of the European Union despite attempts to deliberately confuse and sidetrack the debate.

“The European Union serves the interests of big business, multinational corporations and the financial institutions.

Its policies have made the rich richer and the poor poorer,” Party President Michael Donnelly said. .

” The vote to Leave represents a rejection of that philosophy. We are still very much a part of Europe and will continue to have close relationships at all levels but we can now do so free of the  anti- worker strictures of the EU institutions,” Micheal concluded 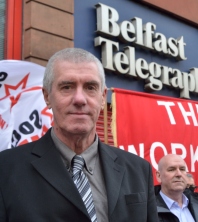 The EU serves the interests of big business, multi national corporations and the financial institutions

In an eve of poll statement Workers Party President Michael Donnelly has said that the major issue in the referendum campaign is the class character of the European Union and its institutions.

“The European Union serves the interests of big business, multinational corporations and the financial institutions. its policies have made the rich richer and the poor poorer.”, Mr Donnelly said

“For 40 years the EU has embarked on a coordinated programme of denationalising industries, privatising the public sector, deregulating markets, dismantling collective bargaining and eroding labour and fundamental rights”, he said

“It represents an ever-deepening corporate project of austerity, privatisation, ‘competitiveness’ and ‘flexibility’ which results in mass unemployment and under-employment, growing poverty, increasing inequality and the destruction of public healthcare and social services”, said Mr Donnelly.

“The European Union has also become increasingly militarised”, said Mr Donnelly. “The ‘Common Security and Defence Policy’ is a device for increasing armament production and a mechanism for political and military intervention in and beyond the EU.   It has taken part in imperialist wars in Yugoslavia, Afghanistan, Iraq, Libya together with the US and NATO and has been deeply involved in creating the crisis in Ukraine”.

“The Workers Party urges workers to vote Leave in the interests of their class and their future. For a principled, socialist Lexit – Vote Leave on 23 June”, Mr Donnelly concluded.

“The Workers Party extends its deepest sympathy to Jo Cox’s family and friends and to all members of the Labour Party on her the tragic and untimely death.” Mr Donnelly said.

“We are acutely aware, particularly in Northern Ireland, of the consequences of violent attacks on the democratic process and on democratically elected representatives”, he said.

” It is very important that the entire community unites in the face of this barbarous attack and reaffirms its opposition to individual and collective acts of terror”, Mr Donnelly concluded.

Workers Party representative Gemma Weir has called  for a public inquiry into the granting of an exploratory drilling licence just metres away from a water reservoir at Woodburn Forest in Carickfergus.

Questions                       ‘The drilling company this week announced that no oil deposits had been found but questions about how the licence was granted and the role of NI Water in leasing the land remain unanswered’, Gemma said.

‘There is also the extremely serious matter of the lack of an environmental impact assessment, how that was circumvented and the role it will play in future exploratory drilling.”

‘I congratulate all those involved in protesting against this drilling operation and also the local companies which supported the protest by refusing to provides services.

‘I will now be requesting a meeting Chris Hazard  the new Minister for the Department of Infrastructure to raise these and other questions and  to seek assurances that his department will not be issuing licenses for similar operations or for  fracking  anywhere in Northern Ireland’, Gemma concluded. 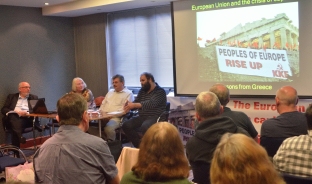 A Workers Party meeting to discuss a principled left exit  (LEXIT) from the European Union  has heard that not only is it un-reformable  but that it is impossible to ignore the class character of the EU and its institutions.

‘The policies of the EU have made the rich richer and the poor poorer’, he said.

Guest speaker at the meeting was Elisseos Vagenas a member of the Central Committee of the Communist Party of Greece, (KKE) who reported on the  lessons learnt in Greece from the Europe Union and the crisis in capitalism.

Read Elisseos’s speech in full: The European Union and the crisis of capitalism

The Workers Party is calling for a class based response to the European Union debate and is in favour of a  Leave Vote as part of a principled, socialist LEXIT strategy.

in the Clayton Hotel.

The guest speaker will be Elisseos Vagenas a member of the Central Committee of the Communist Party of Greece, who will reflect on  the lessons learnt in Greece from the Europe Union and the crisis in capitalism.

Elisseos will be be part of a delegation from the Communist Party of Greece (KKE) which will have a number of meetings with the Party during their three day stay.