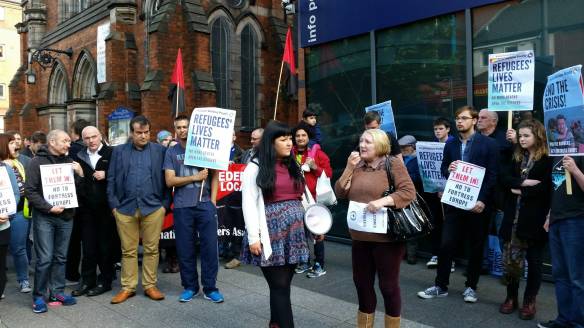 Workers Party members joined with other concerned groups and citizens outside the offices of the European Union in Belfast this afternoon to demonstrate solidarity with the thousands of people, families and young children who are fleeing from Syria, Libya, Afghanistan and beyond and seeking sanctuary and a new life in Europe.

The horrendous scenes of the past few weeks and the vicious responses of most European governments – from razor wire fences to corralling people in camps, to turning their backs on those is need of shelter, food and clothing – have galvanised those who want open borders, humanitarian responses and an end to the US and NATO led attacks which are responsible for the current crisis.

The demonstration in Belfast, addressed by Workers Party representative Lily Kerr,  was the first of a number planned for the coming week and just one of thousands of rallies held across Europe today.