Workers Party representative in North Belfast Gemma Weir has condemned the blatantly sectarian tone of early electioneering in the constituency and has called for people to focus on real issues not on tribal abuse.

Party makes submission on the Criminal Law on Abortion

The Workers Party has  made a submission to the public consultation organised by the Department of Justice on proposed changes to the criminal law on abortion.

While welcoming the opportunity to address an area of the law in which women are denied the fundamental right to choose how they control their own bodies, the Party also expressed its disappointed that the consultation process continued to ignore that right through its repetitive and restrictive focus on two aspects of the criminal law.

Read the Party’s submission to the Department of Justice in full:

Response to DoJ consultation on the Criminal Law on Abortion 170115

An assault on the whole community

Condemning weekend attacks on the home and the car of two north Belfast families, Workers Party representative Gemma Weir has said that the community must and can do more to challenge those responsible.

Workers Party representative in North Belfast Gemma Weir, has challenged Health Minister Jim Wells to take immediate action on the daily drama that is being played out in local health and social care services. 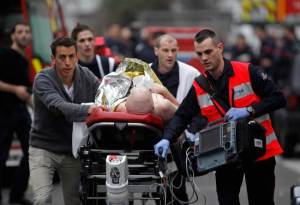 We all have the right work free from the threat of terrorist attack by the enemies of peace, freedom and social progress

The Workers Party has condemned today’s brutal and murderous attack on the offices of the French satirical magazine Charlie Hebdo which has produced understandable anger and indignation throughout France, Europe and the world.

The Party has expressed its sincere condolences to the families and friends of the victims and has re-affirmed its firm support for the right of workers to carry out their work free from the threat of terrorist attack by the enemies of peace, freedom and social progress who have nothing to offer humanity other than misery, obscurantism and reaction.

These criminal terrorist actions will serve only to increase the clamour for further repressive state measures and add fuel to the racists who will use this attack as cover for their vile, virulent toxic beliefs.

The Workers Party expresses its solidarity with the journalists and staff of Charlie Hebdo and the French people and its support for freedom and social progress against racism and reaction.

Michael Donnelly: We must tackle sectarianism

In his New Year statement, Party President Michael Donnelly has highlighted the challenges of sectarianism in  Northern Ireland and  confirmed the Party’s determination to confront it.

The Workers Party must always seek out opportunities both to challenge sectarianism in all its manifestations as well as to offer a real socialist alternative to the political primitives that deliberately instil fear and suspicion among people to simultaneously feed off it for personal and party political advantage.

We have a proud, unchallenged record in that regard and we must continue it for as long as it takes. Sectarianism never rests; neither should we!