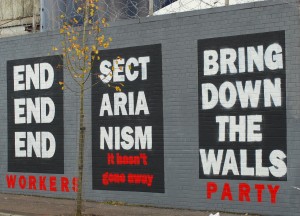 The writing’s on the wall

There are more ‘peace walls’ in Northern Ireland now than there were when the Good Friday Agreement was signed in 1998.

The Workers Party has always been a strong opponent of sectarianism and division. The Party also believes that the walls and barriers which divide people in towns and cities across Northern Ireland should come down.

On the 15th anniversary of the signing of the Good Friday Agreement the BBC’s Chris Buckler looks at ‘peace walls’ and some of the issues around them. His report also features footage of the Party’s ‘Bring Down the Walls’ mural in Northumberland Street in Belfast.