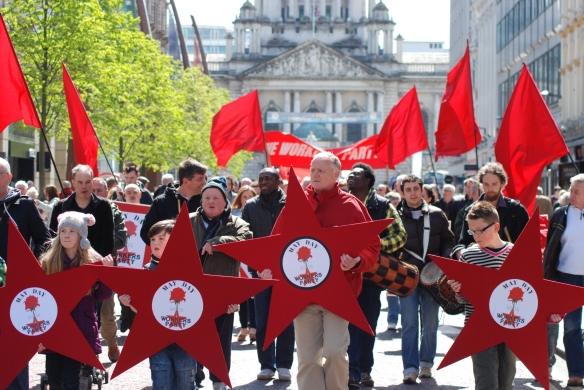 May Day marks the international celebration of the social, economic and political  achievements of working people throughout the world.

The Workers Party participated as usual and this year the Party contingent featured the drums of the ‘Beyond Skin’ anti-sectarian and anti racist project.

Working people are under attack more than they have been for decades.  They are being saddled with the huge debts of banks and are facing vicious austerity.  Workers throughout Ireland are having to fight for the most basic rights and on this May Day.

The Workers’ Party expresses its solidarity and sends May Day greetings to the workers at Vita Cortex in Cork who have been forced to occupy their factory for the last 138 days in order to achieve justice in relation to their redundancy payments.  The same solidarity and support goes out to workers at Lagan Brick who have been involved in a similar action and to all other workers who are fighting for their rights”

It is deplorable that 99 years after the 1913 Dublin lockout we still have employers behaving with the same contempt for workers rights as the likes of William Martin Murphy .

Only a determined and focused stand against injustice by all workers putting joint struggle before sectoral differences.  The motto “United We Stand, divided We Fall” has never been more relevant and the Workers Party calls on all workers to unite against capitalism”.