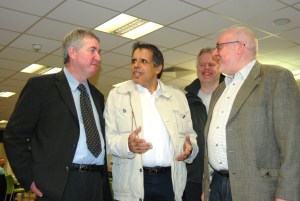 Members of the Party’s Central Executive Committee have met with George Pontikos the International Secretary of PAME the Greek Trade Union Federation.

Mr Pontikos was in Belfast at the weekend  attending a seminar organised by the Belfast & District Trades Council to discusss resistance and alternatives to the Government’s attacks on public services and spending.

The Party discussed the opposition displayed by Greek workers to the IMF imposed austerity measures and economic restructuring in their country.