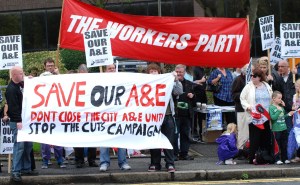 Party members protesting the closure of the City Hosptal A&E

South Belfast spokesperson Paddy Lynn has criticised the current proposal, its timing and its lack of context.

“The proposal to close the A&E department at BCH has been taken with indecent haste”, he said. “Despite a review of local health services announced by the Minister,  this decision is being hurried through with little thought for the consequences or for the options”, he said

“Better integration of services will be a key discussion point during that debate. Integration of decision making is equally important in this process. The future of the City A&E department can only be decided as part of a complete review of health and social care services,” concluded Mr Lynn.

The Workers Party has today called for the immediate release of Brendan Lillis, currently seriously ill in Maghberry Jail,  and has condemned the attitude adopted by Justice Minister David Ford as callous and ill behoving of someone who claims  to uphold libertarian values.

After meeting relatives of Brendan Lillis Mr Ford has said he is sending for further medical reports. This is totally unacceptable. The facts of the case speak for themselves.

The trial judge in the case against Mr Lillis decided the case could not proceed because Mr Lillis was too ill to stand trial.

That alone demands his immediate release from prison where he is seriously ill in the prison hospital.

The treatment of Mr Lillis by the Northern Ireland authorities is scandalous and he should be released immediately.

Any further delay simply adds to the burden of Mr Lillis and his family and is an affront to all those who uphold basic standards of humanitarian beliefs and civil and human rights.